The National Film and Video Foundation (NFVF), an agency of the Department of Sports, Arts and Culture and custodian of the South African Film and Television Awards (SAFTA’s) has selected AFDA Durban’s Head of Postgraduate Studies, Dr Janet van Eeden, to act in the capacity of the Overall Judging Chairperson of the SAFTA’s Judging Committee for the next 3 years.

“I’m honoured to be chosen to be the Overall Chairperson of the SAFTA Awards with my dear friend and colleague, Bongiwe Selane. I was nominated by the SWIFT Board on which I serve as Head of Skills and Mentorship. They reviewed my role as Supervising Judge at the Durban International Film Festival as well as my role as Overall Chairperson at the Simon Sabela Awards and received strong recommendations from the Organiser of DIFF as well as from the COO of the KwaZulu-Natal Film Commission, so it’s a real acknowledgement of respect from the Industry itself. I’m very grateful for this recognition.”

The SAFTA’s Overall Judging Chairpersons is undoubtable one of the most important roles in the film industry. Alongside the SAFTA’s Overall Judging Co-Chairperson Janet will be tasked with the enormous responsibility for maintaining the integrity of the SAFTA’s judging process and ensuring that the necessary deliberations, by all members of the judging panel are conducted in accordance with the highest Film and Television awards standards.

I’ve been invited to do a workshop at the London Screenwriters’ Festival in September, see article here https://www.londonscreenwritersfestival.com/speakers/janet-van-eeden 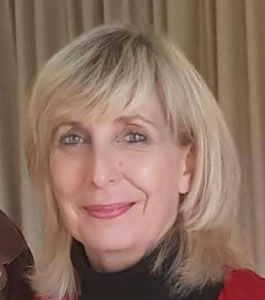 KwaZulu-Natal Film Commission to be the overall Chairperson of the Simon Sabela Awards this past month. These awards are the highlight of the Award season in the province. To ensure that the awards go to the highest quality films produced in the country, Janet created a set of criteria for each category so that the filtration panels could judge the entries equitably. There were over 300 films entered for the prestigious prize and the judges had their work cut out for them

Three sets of filtration judges met during the past month to view the entries in their particular categories. Each panel had a chair, as follows:

Janet reports that the process was streamlined by the use of very specific criteria for each category which removed the possibility of bias and subjectivity. The final nominees will reflect the rigour which went into judging the quality of this year’s entries. The nominees will be announced on the 21st June at 6 pm. Janet wishes to thank the KZN Film Commission’s team of extremely organised young women for making the process efficient, namely the chief organiser, Adolphin Mnguni, as well as Valentia Mthembu and Lungile Duma. She would also like to thank the KZN Film Commission’s COO, Jackie Motsepe, for overseeing the whole process. The awards will be held at the Durban Playhouse in July.
https://www.afda.co.za/article/1144/Chairperson-of-the-Simon-Sabela-Awards/ 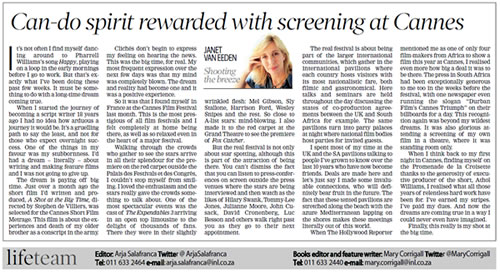 Big Shot at the Cannes Film Festival – article on litnet.co.za 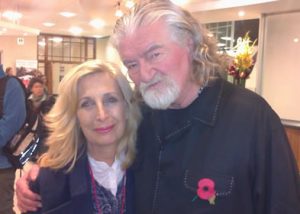 With legendary Hollywood Screenwriter, Joe Eszterhas, at the London Screenwriters’ Festival in October 2013.

A film produced and written by Durban filmmaker and AFDA Durban Scriptwriting Lecturer, Janet van Eeden, A Shot at the Big Time, the short, has been selected for the Cannes Court Metrage, the short film corner of the official Cannes Festival 2014. It was chosen out of over many, many entries.

“This honour is something I have dreamed of since we joined forces to make A Shot at the Big Time, the short,” says Van Eeden. “I’d given up on the dream recently and am working hard at present raising funds to make the feature film by the end of the year, so when I heard late on Thursday night that Shot had been accepted I was over the moon.”

Van Eeden launched the crowd-funding campaign for Shot on 11th of the 11th 2011, on Remembrance Day, in remembrance of her brother, Jimmy, who was killed on the border in mysterious circumstances after being there for only three days in 1979.

“I’d never been able to forget Jimmy’s tragic life, and after being challenged by film and theatre critic, Robert Greig, to write about my own life instead of writing plays about literary greats, I finally had the courage to put pen to paper and tackle one of the saddest experiences of my life,” she explains.

“Jimmy was my idol in the small town of Odendaalsrus. He was a rock star in the eyes of all the youngsters as he was the lead singer in a band which dreamed of making the big time. When he received his call-up papers when he was only seventeen, his dream was put on hold. Especially after he had a traumatic incident in basics which made him go AWOL, steal a rifle and fire rounds of bullets into the rubbish dump with the members of his band. A terrible accident happened and Jimmy had a breakdown and was classified as mentally unfit for military service. He tried to put his life back together again but he was broken by the events,” says Van Eeden. “Three years later the army forgot about the fact that they’d classified him as unfit and called him up to do Border duty. He was part of the infantry but he did not want to kill anyone. There are conflicting stories of what happened to him on the border on that fateful day, but all we know for sure is that three days after arriving on the border, my parents received a phone call telling them that Jimmy had been killed by a ricochet bullet.”

The feature film script of A Shot at the Big Time is based on the the story of the tragic loss of Van Eeden’s brother which she says is Oedipal in its intensity. When she couldn’t get funding for the feature without giving away the rights to the film completely, and thereby compromising on the integrity of the story, she decided to do a crowd-funding campaign after listening to US expert Peter Broderick at the Durban Film Mart in 2011. She decided to produce the film herself. She didn’t raise enough money for the feature on Indiegogo.com but received so much support, including finding gifted young director from Australia, Stephen de Villiers, that she decided to shoot the short film instead. The lead actors auditioned online as part of the crowd-funding campaign and “the best actors I could’ve dreamt of” were found in Brad Backhouse as Jimmy and Sean C. Michael as the antagonist Van Staden as well as ex-Durbanite Tim Wells as Wiese. De Villiers flew out in July 2012 to film Shot the Short. Even an executive Producer, Athol Williams, was found through the campaign and he gave whatever he could to make the short film happen.

A Shot at the Big Time was one of the projects selected for the Durban Film Mart in 2012 and the short film premiered at the Durban International Film Festival in July 2013. It was awarded an eThekwini Film Award in November 2013.

EPK of Shot the Short:
https://www.youtube.com/watch?v=Yup20BzinJY 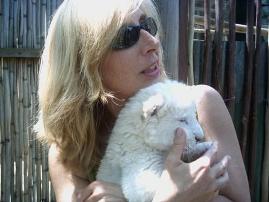 White LION. For more information on the film go to www.whitelionthemovie.com 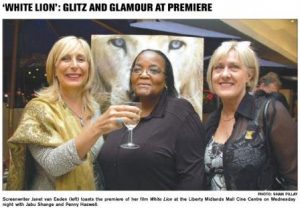 Interview with me on this site on The Witness:
http://www.witness.co.za/index.php?showcontent&global[_id]=35020

Review of White Lion from the Witness:
http://www.witness.co.za/index.php?showcontent&global[_id]=36250